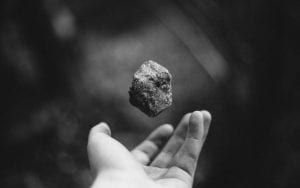 I have really been enjoying reading Carrie by Stephen King. The storyline is very intriguing and leaves me wanting more whenever I have to put my book down. King also uses some interesting elements that enhance the story. For example, he uses parentheses to express characters’ thoughts, “She swung her whole arm into the blow, and the sound of her palm against Carrie’s face (o god i am so afraid now) was like that flat sound of a leather belt being snapped in air” (King 113). This helps the reader to further understand what the characters, or in this case, Carrie, are thinking and feeling. Because of this, I would like to focus on the point of view of the story for my literary analysis paper. Even though the book is written in third person point of view, the way King organizes everything makes it much more exciting than just a plain third person narrative. He is able to incorporate multiple characters’ thoughts and feelings through the use of different letters and articles, which, despite the fact that they are all separate and come from different sources, flow together and help the story along.

As I have said before, I love the format of Carrie. I really admire how King is able to create all these “articles”, “letters”, and “interviews” and combine them to create a logical and convincing story. One example that really blew my mind is an article about how telekinesis may be inherited, “It is now generally agreed that the TK phenomenon is a genetic-recessive occurrence–but the opposite of a disease like hemophilia, which becomes overt only in males” (King 120). He follows this with a “speculation” of how Carrie may have inherited telekinesis. As of today, telekinesis has not been proven to exist, so clearly King had to come up with an explanation of the science behind it, proving to the world just how creative he is. 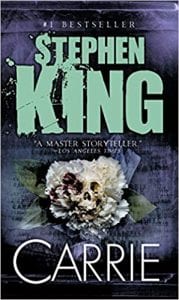 I’m currently reading the book Carrie by Stephen King, which is centered on a girl named Carrie (hence the title) who has had a strict Christian upbringing, and as a result, has been teased and bullied by her fellow peers. During one of these incidents, she realizes that objects near her tend to break when she is upset, leading her to discover that she is telekinetic. I haven’t gotten very far in the book, but because the book is described as a “gory and horrifying” novel,  I think it’s safe to assume that Carrie ends up using this power against her peers and killing them. Because of this, I think the true conflict of the entire book is the ways Carrie uses telekinesis to hurt others, rather than the issues she has at school.

It seems that the only way this conflict could possibly be resolved is for Carrie to die. I know it sounds gruesome, but because she is telekinetic, she would be uncontrollable even in prison. Moreover, if she stays alive, she would be a huge threat to the human population. Anyone that crosses her path could die if they get on her bad side (or not – I’m assuming that she has the ability to kill people through telekinesis). Additionally, the book is written as a series of letters and documents, so everything is in past tense, hinting at the fact that she has already died.